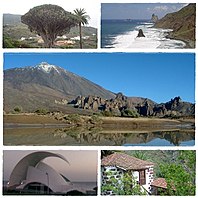 Has a population of 906,000 residents. The currency used is the Euro (€). The main touristic attractions are Teide Observatory. The closest airports to the island center are Tenerife North (24 km), Tenerife South (32 km) and La Gomera (77 km). Tenerife is a island in Spain where Trabber offers 5 hotels.